Boostrix, a New TdaP for Grandparents 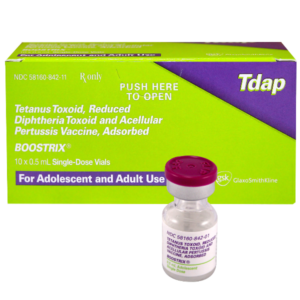 A bit over a decade ago, Adacel (made by Sanofi Pasteur), the first TdaP vaccine for prevention of adult whooping cough (pertussis), was released.  TdaP stands for Tetanus, diphtheria, and acellular Pertussis. The acellular production allowed it to be given to adults without producing severe reactions. We had learned that pertussis was actually quite wide-spread in the community, producing severe and prolonged coughs in adults, and possibly devastating illness for infants.

The TdaP vaccine was recommended for all children and adolescents after their original DPT series and also as a booster to mothers at each pregnancy. In addition, the CDC (Centers for Disease Control and Prevention) recommended that all fathers and grandparents of infants get a TdaP immunization to boost their immunity against pertussis to protect the infants from exposure. We did that in our practice since then. However, Adacel was never tested in people over age 65 and therefore was not officially recommended by the CDC in that age group.

Along comes Boostrix (made by GSK), a comparable TdaP vaccine that has recently been tested in populations over 65 and found to be efficacious. So we now have a proven useful and safe vaccine for older patients. The major indications for its use are if the person never had a TdaP booster, and especially if there is expected exposure to infants. Interestingly, Boostrix is not new. It came out about the same time as Adacel and had previously been approved only for ages 10 to 64, the same as Adacel. But GSK just did additional studies and established its efficacy for those over 65.

What Will We Do?

We plan to stock Boostrix for our grandparents. We are undecided if we will continue to use Adacel for those from teens to age 64, or switch to Boostrix from Adacel. The side effects and cost are comparable.