79,000 Influenza Deaths in 2017. Opioids Close Behind Our Counsel on Ballot Question 1 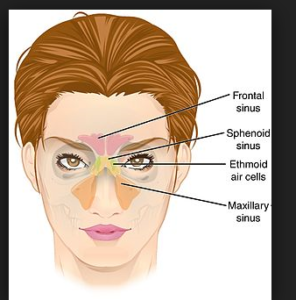 The sinuses are hollow areas in the bones of the face. When the lining becomes infected, extra mucus is produced causing a stuffy nose, pain in the face and yellow or green discharge. The condition is often referred to as rhinosinusitis as both the nose and sinuses are affected.

Viruses associated with the common cold cause the vast majority of cases. Bacterial infection may later develop in an inflamed sinus cavity. While viral sinusitis is treated with supportive care, antibiotics may be needed to treat bacterial disease.

Yes. It is really common. 12-15% of adults are affected annually.

How do I know if my symptoms are viral or bacterial?

How is sinusitis treated ?

Sinusitis congestion is really common and is largely caused by rhinoviruses, which are not affected by antibiotics. Supportive measures are usually sufficient to keep you comfortable for the 7-10 day total course of the illness. More severe or longer duration sinusitis symptoms suggest bacterial infection, where antibiotics are indicated. The popular Zpak is rarely the right choice.

Tagged with: Ask The Doctor • Did You Know?