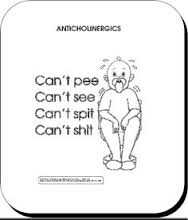 A new study in JAMA Internal Medicine on January 26, Cumulative Use of Strong Anticholinergics and Incident Dementia, highlighted the possibility that a range of commonly prescribed medications may be seriously harming memory function and promoting dementia in older individuals if used for over three years.

The types of drugs at issue include:

1.  Antidepressants such as amitriptyline (Elavil) and nortriptyline, but also some newer SSRI drugs such as Paxil (paroxetine). Some of these appeared to be harmful even in very low but continuous dosage (such as 10 mg daily for amitriptyline, which is truly the tiniest dose available).

2. Antihistamines mainly of the older varieties that are available over the counter. These include Benadryl (diphenhydramine), Chlor-Trimeton (chlorpheniramine), and Atarax (hydroxyzine). But these were cited in more sizeable minimal amounts, such as 50 mg daily for diphenhydramine, which is pretty sedating for most people and rarely used on a continuous multi-daily-dose basis.

3. Antispasmodics, which include antimuscarinic receptor drugs for spastic or irritable bladder like Detrol (tolterodine) and oxybutynin, even in lowest daily dosage, which are frequently for continuous use, and classic intestinal antispasmodics such as clidinium (Librax) and dicyclomine (Bentyl), which are usually used only intermittently but occasionally are continuous.

Anticholinergic Effects Are Thought the Problem

The drugs in question all share what are technically called “anticholinergic” effects. A person might notice a dry mouth, blurry vision (with dilated pupils), and slow urination and defecation, for example, as side effects and annoyances along with the desired therapeutic effects. However, some brain neurotransmitters require acetylcholine to be moved between neurons as they communicate, which is called “cholinergic” neurotransmission. It is therefore possible that oral medications with “anticholinergic” effects could interfere with normal brain function in a way that could be harmful if used for extended periods.

This was a records review study, though computer-based, with lots of caveats. For example, no differential mental harm showed up that was statistically significant in the first three years of use. And there are real problems understanding how many pills anyone actually took. Nevertheless, my takeaway would be that we should be quite thoughtful and careful in recommending any use of these categories of drugs in older patients (over 65-70 or so) except on a short-term or intermittent basis. We perhaps want to be equally cautious with all ages, if the physiological linkage is validated. We undoubtedly will get smarter on this topic with further detailed investigations.