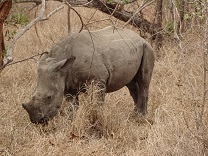 Our recent trip to South Africa and three different game reserves opened a perspective on animal life that had escaped my attention. In the bush the basics of existence are out front and center.

All animals in the wild spend the vast majority of their time foraging for food. This applies to the enormous white rhinoceros, which resembles a small locomotive slowly advancing through the bush, as well as to the herds of impala grazing, or to the massive elephants tearing apart trees to get a few tasty branch or root tips. Food, food, food. Perhaps 16 hours a day. Animals constantly on the move to find forage.

On the other side of the food equation are the predators — the lions, wild dogs, leopards and so forth. They hang out all day long (the lions do a lot of lying about), but get active all night to find their prey, who in turn use their best efforts not to be eaten. And if a leopard makes a kill, it has to defend it from other predators. And so it goes. Eat, don’t get eaten.

Sex and Dominance Are Close Behind

The pecking order stands out in almost all the animal herds. There is only one dominant male in many species, who then reserves the right to mate with any or all of the available females. Other males sneak around the edges until they perhaps challenge the dominant male. Some species have mating pairs who stay together for the duration, mainly among the antelopes and other grazing animals. We watched one show where the dominant male elephant essentially went up and down the line of assembled cows to sniff out which one might be in estrus, while two other males watched from a safe distance. An extraordinary scene.

I first thought how different this wild animal world was from humans. Just food, dominance, and sex. Humans lives have so much more. Nevertheless, if you take a step back, lots of our human lives are consumed by those same issues. I suppose our humanity and uniqueness lies in all the other things we do, from arts and science, and abstract thought, and complex construction, as well as wondering why we are here, if there is a reason we can discover or construct for ourselves. Watching the animals in the African wild was fascinating and thought-provoking.