How Bubbe Killed Zayde With Love and Deli

In the early 1970’s, shortly after my marriage, I observed that we had four grandmothers (bubbe) but only one grandfather (zayde). And in looking at other Jewish families, I saw that our experience was common. I then had occasion to do a brief medical check on the surviving grandfather at a family gathering. He had terrible high blood pressure and clearly wasn’t really taking the medicines he had with him. He died of a stroke soon after.

In retrospect, especially since I have been focusing on the sodium (salt) content in prepared foods, it all comes clear. The Jewish delicatessen and related ethnic food that was lovingly served to the men (and women) several times a week was extraordinarily high in sodium and fat and almost certainly contributed to their early demise from stroke and heart attack.

How Lethal Is a Hot Pastrami Sandwich?

You should remember that reasonable dietary recommendations for total sodium (Na) per day are less than 2500 mg. Stricter ones that may be overly enthusiastic are 1500 mg or less. For saturated fat, a good guideline for keeping your arteries clear is less than 20 g daily (about 2/3 oz of isolated fat), such as found in 4 oz of cheese or 12 oz of prime steak alone. 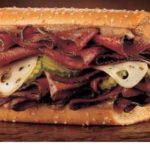 Let me construct for you the calorie, sodium and saturated fat content of a typical hot pastrami sandwich (not a ridiculously sized one from New York’s famous Stage Delicatessen) with Swiss, deli mustard, and pickle slices on the side. This will not include the cole slaw or potato salad that might go with it. The results for corned beef are quite similar. We can use the USDA nutrient data base that I have shown you before:

Have Some More Chicken Soup, Dear

During the week of Passover, observant Jews do not eat regular bread, but only matzah (also matzo), essentially a large flat cracker made from flour and water. This is of great symbolic value (the rushed departure from Egypt) during the family Seder celebration but otherwise not much in the way of flavor unless it is enhanced with salt or butter or crumbled into chicken soup (see above). Since Jews (like Italians) really like to eat, various dishes evolved that heavily incorporated matzah. I think the best is matzah brei, essentially cracked matzah scrambled with eggs and sautéed in chicken fat. Yes, that is chicken fat. Here’s how the major ingredients play out for a typical portion of 1 1/2 matzoth (plural, one of many spellings):

This dish is sort of a bargain. Only almost a half of a day’s saturated fat but not also accompanied by an overload of salt, except that most people really salt this dish at the table.

What to nibble on? I really like sour pickles. We were sent salamis at camp. Perhaps that evolved into a taste for beef jerky? Also, smoked whitefish from Zabar’s is great. And even bland old gefilte fish (pike and various whitefish) with horseradish. Are they too laden with salt?

This short epicurean review illustrates how salt pervades the traditional Jewish family foods and delicatessen to quite extraordinary amounts. Much is obvious and tastes salty, but some (such as the salt in Nova lox, which I had thought was only smoked) is much more subtle but almost as substantial. But they all rev up your blood pressure by holding extra fluid in the blood vessels. And other foods, especially those flavor-enhanced by cooking in chicken fat, are extraordinarily high in the saturated fats that clog those same arteries.

Current generations are fortunately more aware of cleaner and healthier eating and mostly do not make these foods a central part of their lives. Many more of the grandfathers and great grandfathers are surviving. But, damn, those foods are mostly pretty tasty.