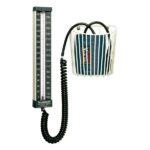 New guidelines for hypertension treatment by a joint group of the American College of Cardiology and the American Heart Association were just published in JAMA. 2014;311(5):507-520 after release online in December. In brief, these guidelines loosen the standard goal for treatment for persons over age 60 up to 150/90, but maintain a somewhat tighter goal of 140/90 or less for younger populations.

The easing of the goal was attributed to a lack of randomized controlled trials proving that treatment to lower goals was more effective in reducing death and disability from high blood pressure. It also probably reflects our relatively poor success nationwide getting people’s blood pressure consistently down. So raising the target blood pressure was similar to lowering the passing grade on a high school exam from 80 to 65 to improve the portion of students passing that test. Some medical groups other than the ACC/AHA committee feel the same way and say the treatment goal should be unchanged at no higher than 140/90.

I find the committee’s rationales for relaxed standards less than satisfying because we do know that rising blood pressure is more or less linearly related to increasing stroke and heart attack at all ages. So a BP of 120/75 remains much safer than one of 140/85 or 150/90. Lower is better, unless you overdo the treatment and get symptomatic (rarely an issue at 115 systolic or greater).

Moreover, if you have significant hypertension it is for the most part relatively easy to use currently available medications to get the pressure down to 120-130 systolic with comparable low diastolic values of 75-85 or so, without suffering adverse effects from those meds.

Our goal will continue to be <130 systolic

So, I intend to continue to strive for BP < 130/85 for almost everyone. For most of you with hypertension, we are already there. The exceptions will be the occasional person with truly recalcitrant BP for whom we cannot achieve that standard without significant drug side effects, or for the occasional great grandparent for whom the lowest blood pressure may not be appropriate for brain circulation.