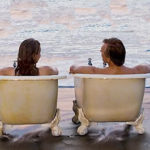 Who filled the tubs?

Several patients asked me what I thought about the recent NY Times article that focused on the push by pharmaceutical companies to have every man worrying about whether or not he had “low T.” The incessant ads suggested that low testosterone (“low T”) was frequently the source of previously unrecognized male problems of mid-life and of aging.

In general, such concerns are overblown. I do pay careful attention to strength, sense of vigor, and sexual performance with each man, but only occasionally is a seriously low testosterone (which can be corrected) the source of any functional ailment. I wrote this up carefully in my post this past March.

While some men with sexual performance issues and low testosterone levels are helped by testosterone supplementation, some men are not (even when we document substantial improvement in the serum testosterone). Further, serum estrogen levels (estradiol) in men may play an important role in sexuality, more than noted before.

Recent variations: for men who are demonstrably deficient in testosterone we can alternatively use clomiphene — an oral drug originally employed to improve male or female fertility by inducing the pituitary to release more hormones that stimulate the testicles to produce more testosterone and sperm (and to aid the ovaries in women to develop more eggs) — in place of the transdermal or injectable forms of testosterone. And clomiphene also induces slightly higher estradiol levels in men, which may be beneficial. I am using clomiphene in a few patients now. Undoubtedly there will be further variations.

The twin bathtubs are a wonderfully stupid symbol of big pharma excess in marketing drugs for male sexuality. Remember, they make big money not only with their testosterone supplements, but also with the specific erection aids (PD5 inhibitors such as Cialis, Viagra and Levitra that enhance erections when the man’s built-in hormone system is flagging). Despite the recent hoopla, there are no hormonal revolutions right now. Big pharma is just doing what it does really well, marketing narrow-use drugs direct to people while implying much greater applicability to make lots of money.

The real revolution will come when there is a breakthrough in understanding women’s libido and the possible hormonal pathways that might enhance it.  Human biology’s biggest and most perverse joke is the discordance between male and female sexual drive in midlife. We have a reasonable handle on men’s libido and erectile issues. Women’s biology appears more complex, with nothing so simple as nitric oxide release in the penis generating an erection. At some point we will get better understanding and biological tools to help the female sexual response. At that point you will see unleashed ad campaigns that will dwarf anything you have ever seen to date, and the twin bathtubs will appear as a quaint historical relic. I promise you I am staying on the lookout for useful biological information for either sex as it evolves.