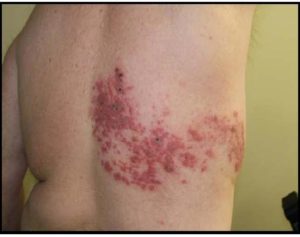 Shingrix is a new vaccine for shingles (herpes zoster) infections that has been approved by the FDA and will be available early in 2018. We plan to offer it to everyone over age 50, including those of you who have had Zostavax. Why? Because it is notably more effective than Zostavax, the shingles vaccine we have been giving patients for the past decade. Protection from shingles infection by Shingrix is at least 90% in all age groups. By contrast, Zostavax efficacy ranged from 70% at best to 38% in people over 70.

Almost all adults have had chicken pox (varicella) infection, although now children and some people currently in their 20’s were vaccinated against chickenpox as children. In general, a person infected by chicken pox will fight the virus, but typically a remnant infection remains, usually resident in the origin of a nerve along the spinal cord. During a time of physical stress or illness, or sometimes for no apparent reason, the virus will escape its confines and reproduce and spread down the course of that nerve. It might be a nerve along the chest that wraps around from the spine to the front, or one down the buttock toward the foot, or over the eye covering half the forehead. The virus produces painful blisters in clusters along the course of the nerve. The outbreak may be preceded by fever and burning sensation. There may be great pain along the course of the nerve.

A varicella recurrence outbreak along a nerve root is called herpes zoster. It will run its course over several weeks without treatment. Antiviral treatment with Valtrex (valcyclovir) or Zovirax (acyclovir) shortens the duration and lessens the pain, but the treatment is a help and not a miracle. Sometimes there is long-term burning pain along the nerve that persists for months or even indefinitely. Truly a terrible outcome, which is difficult to completely mitigate with other drugs. The blisters contain live varicella virus (a member of the herpes virus class, hence the name herpes zoster). Nonimmune people can catch chicken pox from one person’s zoster lesions; zoster itself is always a reinfection from prior chicken pox in the same individual.

It should be evident that shingles is a miserable disease and to be avoided. So long as there are people living who had chicken pox early in life, there will be risk of zoster with its painful course. The new vaccine, Shingrix, appears to be extremely effective and safe. It is a recombinant vaccine, so no infection is possible from it. It requires two separate injections between two and six months apart. It will be indicated in essentially everyone over age 50, whether or not they have ever had shingles or Zostavax.

We are not yet clear about details of coverage from Medicare or major insurers. The cost will be somewhere close to $300 for the two shots (this is an estimate now). We expect all major insurers and Medicare to cover it in some fashion, though with Medicare it may be through Part D reimbursement. As soon as the payment process is clarified and announced, we will be able to offer the vaccine. At the moment we expect sometime in 2018 Q1. We will keep you informed.