The Fascinating Arithmetic of Guns in the U.S. 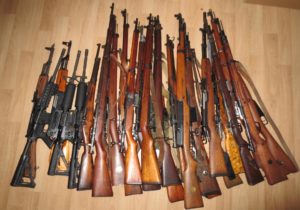 We are all affected by the slaughter of the students at Parkland high school a few weeks ago, and uplifted (I hope) by the massive turnout of demonstrating students and adults all over our country and around the world to protest gun violence. In this fraught situation, many of you may have noticed the special opinion section in the Boston Globe yesterday that offered some key statistics and seven proposed practical steps the country could take, based on Massachusetts experience, to limit the slaughter going forward.

I was particularly struck by 2 numbers in the Globe, which they attributed to the National Firearm Survey from 2015:

For me, these numbers begged being made more concrete and communicative. So let’s add in the population of the country and the total number of guns in the country:

The Magic of Division and Subtraction

Through the wonders of arithmetic, we can readily derive the following:

What a Concentration of Firepower

Over 15 guns per person for under 10 million Americans account for half of all guns in the country. Did you have any idea of that concentration of hardware? I certainly didn’t. Nor do I recall any real public discussion of the skewed ownership of guns. When a reliable federal survey indicates over three-quarters of Americans do NOT own a gun, and 3% of Americans own half the guns? These numbers are worth pondering. There are policy prescriptions in there somewhere that a rational body politic would figure out.